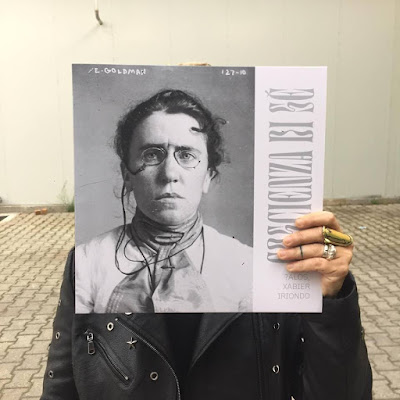 Out the 12 April 2019 Lp limited ed. 300pz on Sangue Disken (I) and Cheap Satanism (BE)
You can order on:
https://sanguedisken.bandcamp.com/album/coscienza-di-s

Coscienza di sé is dedicated to Emma Goldman, American writer and philosopher of Russian-Lithuanian origins, also portrayed on the cover pic, with artwork by Stra. The lyrics of the five tracks refer to her words, revolutionary for having conveyed freedom of thought, anarchy and feminism from the end of the Nineteenth century to 1940, the year of her death, but unfortunately “necessary” even in our present. “We started recording the songs in 2018, when feminism was regaining life. Everything, then, has reachead a sort of maturity. Many people, including many young feminists, don’t even know who Emma Goldman is. That’s why her figure must be absolutely valued. The concepts shouted by Goldman a hundred years ago have never been so current. We believe that in this historical moment it’s even more important that musicians return to talk about politics”.

The tracklist moves from Apertura, in charge of starting the record and invoking open mindedness, to Gelosia: “Considering the numerous cases of feminicide and domestic violence, today jealousy is a subject of great relevance”. We continue with Autoaffermazione, the same Coscienza di sé that gives title to the whole work and Amore libero. “Goldman’s feminist vision coincided with the aspiration to an emancipated woman, capable of fighting on the front line. In addition, her idea of anarchy was to be applied to all the aspects of human existence, both political and individual”.

Stefania Pedretti has always experimented with female issues during her career, but never so explicitly. The challenge of using her Italian language, a key-element of the collaboration with Iriondo, makes communication more vigorous. While she sings, declaims and screams, with her voice elaborated through a vocoder, while becoming flesh for the Goldman’s verb and playing also synths, Xabier Iriondo focuses on the bass – his main “weapon” in this duo adventure – and on a drum machine of the early 70s. “The goal was to mantain power and ferocity using instruments not strictly related to rock music in its traditional form”. The result is a modern sound, linked to avant-garde and art-punkbut with a peculiar immediacy. “Coscienza di sé is our most popular record. We wanted to use electronics and some ‘catchy’ rhythms to make very strong and meaningful contents sound direct. We hope people can discuss about all this”.

Involved in many projects, Stefania and Xabier – who recorded the EP at the Zulo Gorria Studio in Milan – have renewed a special alchemy. “There are harmony and cohesion between us”, they say. “We worked with considerable intensity for short periods of time: in less than seven days, spread over a year, we have realized recordings, arrangements and mixes. We trust each other’s intuitions, so our artistic partnership is very constructive”.

The impact is extraordinary: Coscienza di sé explodes loudly, in the deafening silence of a de-evolutionary society. It explodes in the stereo and in the head. To quote Autoaffermazione, “True emancipation has begun!”. Good “listening”, now.