Yomi is out in  free download in Pan y rosas disco from the 21.12.2012
this is the link
http://www.panyrosasdiscos.net/pyr067-alos-yomi-loscura-terra-dei-morti/ 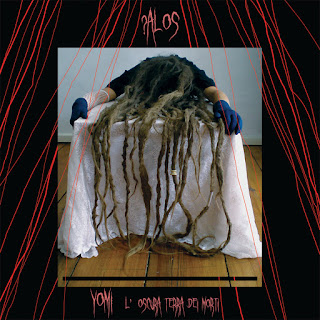 In japanese culture yomi is the afterlife. it is a dark place, inhabited by monstrous creatures, where dead people rot in eternity regardless of their behavior when alive. this album is about the transition between life and afterlife. it also sees ?alos’ focus transition from the role of woman in the social context of her work to that of woman as shaman; a keeper of secrets – nature’s secrets, herbal secrets, afterlife’s secrets, birth and death’s secrets. roles that have been forgotten – misrepresented by a patriarchal and christian concept of progress. these women were accused of witchcraft, persecuted and driven to the underground, and thus often forgotten.
yomi, l’oscura terra dei morti also acts as a bridge between what ?alos was and what it is about to become. the first two songs are new versions of old songs; re-played and resung in a way that is closer to ?alos’ live sound. her voice is more aggressive, the guitar more abrasive. the third song, panas, will appear again on ?alos’ next album, but it appears here remixed by kawabata makoto of acid mother temple who transferred her original recording to an analogue tape and then added layers of his own guitar – bringing the whole thing closer to yomi, the dark land of the dead.
in ancient sardinian culture, panas are the spirits of women who died in childbirth, who come back into the world but are damned to wash linens along the rivers, singing sad songs to accompany their sorrow.
all music by:
stefania pedretti – vocals, guitar, cello and objects
claudo rocchetti provided electronics on fili di capelli
kawabata makoto provided further guitars, tambura, sitar and remix action on panas
recorded by boris wilsdorf in june, 2009 at anderebaustelle (neubauten) studio, berlin.
artwork by ango the meek dead
originally released as a 10 inch record in 2010 as bar53 by bar la muerte records
tracklist
01. fili di capelli 02. taglio 03. panas


if you didn't... you can download also Ricordi Indelebili
http://www.panyrosasdiscos.net/pyr055-alos-ricordi-indelebili/